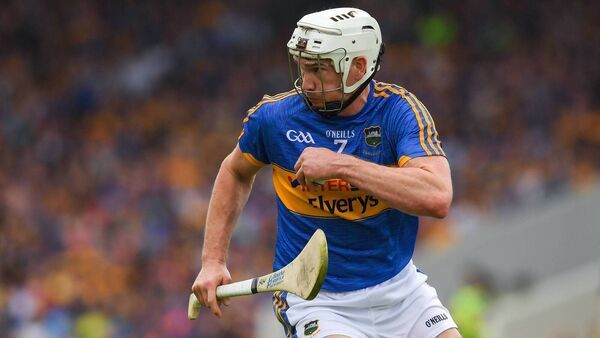 This candidate was noted young as a right prospect and he departs the Tipperary jersey, quite apart from the glitter of silverware, with the most important accolade secured. They will say: ‘He fulfilled his potential.’ There is no bigger achievement, whatever won, whatever lost.

January 2020, and their side leads St Thomas’ of Galway by three points in added time, a club All-Ireland semi-final at stake. Maher shimmies to the right, fixing his marker in position. Then he turns out to his left side, and strikes over.

Their supporters erupt at the insurance point. Even Maher, always a composed figure, flexes with delight. Borris-Ileigh, champions of Tipperary, are on their way to Croke Park.

Come eight years’ time, when this decade is done, that score will remain an icon of 2020s hurling. Why? Because the point was struck with half the bás of Maher’s hurl gone.

Seconds earlier, he had damaged his stick while half blocking the St Thomas’ goalkeeper, James Barrett. This intervention led directly to the opportunity converted.

Borris-Ileigh have long been a taproot for quality Tipperary hurlers, but no one’s talent ran deeper than the qualities possessed by Brendan Maher of Cullohill.

“That point against St Thomas’ was out of this world, even by Brendan’s standards,” Timmy Delaney stresses. Deeply involved with their club since the 1960s, playing days followed by immersion off the field, Delaney stands perfectly placed to comment.

“Another lad would have been waving out to the sideline, looking for a new hurley. But not Brendan. He is composed out, and stayed following the play.”

“A brilliant hurler on the field is not always a brilliant person off the field. But Brendan is both of those people. With him, we got two for the price of one. Even if he had never grown up to be such a marvellous hurler, Brendan would still be a marvellous addition to our community here in Borrisoleigh.

“But what other way could it be ... Brendan is from great stock on both sides of his family, the Mahers and the Treacys alike.”

That passage of play turned all the more resonant as news emerged of this man’s retirement from the intercounty arena. No longer will he grace Tipperary’s colours. His departure marks, in all likelihood, the end of a rich Premier era, one that began with defeat to Kilkenny in 2009’s senior final and likely concluded with victory over Kilkenny in 2019’s senior final.

He is a hurler in the classical style. Righthanded, right hand on top and a striker of frees off his right side, but equally comfortable off his left, Brendan Maher remains a stamp of Tipperary’s finest traditions. Forceful and clean, highly skilful and fiercely combative, he experienced few poor outings. There is a hard elegance to his hurling, a tremendous splice of graft and craft. He never did anything for the mere sake of doing it, mere embellishment.

This candidate was noted young as a right prospect, and he departs the Tipperary jersey, quite apart from the glitter of silverware, with the most important accolade secured. They will say: ‘He fulfilled his potential.’ There is no bigger achievement, whatever won, whatever lost.

Only an NHL title and Hurler of the Year eluded him.

This hurling career is far from over. “Brendan came on against Templederry the other evening,” Delaney notes. “And the whole thing just immediately changed, like a door opening. We would hope to see plenty more of him in the maroon jersey.”

“There was a buzz about him early,” Delaney smiles. “My brother Michael worked in Nenagh, and would have passed the Mahers’ home house twice a day. I remember him saying to me 25 years ago that the youngest lad of the Mahers was out every morning banging a ball against the wall, waiting to be picked up for school.”

He pauses, enlarges the frame: “But it wasn’t all plain sailing. As a very young fella, Brendan contracted meningitis. The whole parish got an awful jolt, and his parents had a really rough few days, but he got back right as rain, thank God.

“I know people will think I am going over the top, but maybe there is a destiny with certain stuff. Was Brendan destined to be another Borris-Ileigh man to captain Tipp to the All-Ireland, the fourth one to do it? Maybe someone was looking out for him with the meningitis.”

Maher himself nominates the local senior final victory in 2019, bridging a 33-year gap, as the highlight of highlights. His feats in that campaign left him Club Hurler of the Year. That taproot kept pulsing with life.

All square and into the 47th minute, with the ball pinging around midfield as if in a pinball machine. Maher comes from deep and snaps possessions, strides off, and rifles over off his left for the lead.

“I will never forget being in the stand for that point,” says Timmy Delaney. “Jerry Kelly, a grandson of ours who was on the team, said to me afterwards: ‘I’m only a rookie, but I think every player knew what we had seen. Was ever a better point scored? We all knew that we could pitch in a bit more, if Brendan could do something like that.’

That was what the lads felt, out on the field.

“And we all just knew we were going to drive on and win the thing, with Brendan in that kind of mood.”