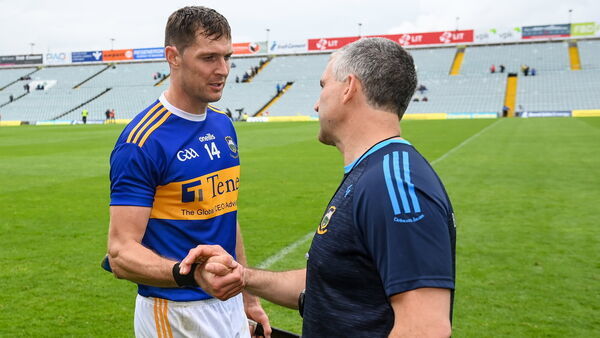 When Liam Sheedy returned as Tipp manager in autumn 2018, his first move was to make Seamus Callanan captain.

Sheedy had handed Callanan his championship debut as a teenager in 2008 but Sheedy’s judgement was never going to be clouded by personal loyalty or deep emotional connection. Callanan was the best man for the job.

Callanan confirmed as much by the end of the following season. He’d been short-listed for Hurler of the Year for three successive seasons between 2014 and 2016, but came up short on each occasion, being desperately unlucky not to win the award in 2016.

At the end of 2019 though, Callanan emphatically secured the top award, scoring a goal in each of Tipp’s eight championship games.

It was a huge personal triumph for Callanan, especially in the context of the previous two seasons. Apart from the rout of Dublin in 2017, Callanan had failed to score a goal in the 2017 and 2018 championships. He only scored 0-5 from play in four matches in 2018.

The return of Sheedy and Eamon O’Shea and a new management team reinvigorated Callanan but making him captain was also a huge statement by Sheedy. Tipp had just won an All-Ireland U21 title. The seniors had bombed in 2018, but Sheedy resisted the clamour for change. He wanted Callanan and Tipp’s three other Hall-of-Fame players — Padraic Maher, Noel McGrath, and Brendan Maher — to lead the charge for another All-Ireland.

The manner in which they did corroborated their greatness, and the faith and trust Sheedy had invested in them. All four were All-Stars at the end of that season.

The satisfaction was all the greater again for Sheedy considering how much of a part he had played in framing their journey to greatness. Sheedy brought Brendan Maher onto the Tipperary minor panel when he was just 16 in 2005. He did the same with Noel McGrath a year later. Similar to Callanan, McGrath also made his senior debut under Sheedy while still a teenager. The two Mahers were only 20 when Sheedy handed them championship starts.

Blooding them at such a young age was the greatest expression of Sheedy’s trust in those players at that time. Age and time certainly hadn’t diluted that trust when Sheedy returned nine years after he departed, but it had a different currency at the outset of this season. Those four players showed flashes of their old brilliance last year, but none reached the standards they first set for themselves years ago.

Just as he had been at the start though, Sheedy was going to be the defining factor in the end, and in their immediate futures. Would all four return for 2021? After winning All-Ireland U21 and U20 titles in 2018 and 2019, would Sheedy initiate a rebuild with some of those younger players?

None of them blinked. It looked like one final charge for Sheedy with the older brigade. All together.

After it failed heroically on Saturday, the sense now is that Sheedy will move on and his chief warriors may have no more battles left to fight without their leader. Even if they wanted to keep going, a new manager may decide it is time to devise a new strategy with younger blood. Yet if the Waterford game is to be their last great battle, those older players went out on their shields.

The dynamics of Sheedy’s long and deep relationships with those players was always going to frame his belief that they could still give Tipp what they need, without being the players they once were. Sheedy has never been afraid to make hard calls, but his critics say that he should have made them sooner to start a reconstruction process that could now take a lot longer under a new manager.

On the other hand, Sheedy wasn’t dealing with normal circumstances over the last two seasons. Last year was too fractured to initiate any real meaningful change and, anyway, Sheedy had to remain loyal to the players who won him the previous year’s All-Ireland.

With Tipp’s season only finishing last November, and with the squad only returning to collective training in April, blooding a raft of new players in a condensed league was never really a viable option ahead of a rapid-fire championship, The flip side to that argument is that Tipp used 26 players in their first three league games against Limerick, Cork, and Galway. Players got chances. Sheedy always said his judgement was based on what he was seeing at training, with data and form always superseding loyalty and friendship.

“People are probably questioning what’s in the group, guys are a year older and are the younger guys coming quick enough,” he said before the Clare game. “The reason they are on the teamsheet has nothing to do with their age. The guy that starts, whether he is 21 or 31, the decision will be based on the data I have seen over the last number of months. That allows me to sleep very easy at night. Ultimately, if we come up short it will not be because of age, but because we are not good enough.”

Now that Tipp weren’t good enough, the big question is what happens next? If Sheedy does go, the obvious replacement would be Liam Cahill, especially since he managed Tipp to recent U21 and U20 All-Irelands. Cahill is unlikely to walk away from the Waterford job at this stage, but he still had no problem answering the question everyone in Tipp is now asking.

“Tipperary hurling at senior level is probably at a big crossroads now because there are a number of players there that have maybe big decisions to make over the next number of weeks,” said Cahill after Saturday’s game.

After that, will McGrath, Callanan, and the two Mahers think they have more to offer? Padraic had a solid year. Brendan’s form never really caught fire after struggling to shake off an ankle injury earlier in the season. Callanan showed flashes of his genius with three goals against Clare and Waterford but he wasn’t on the ball as much as Tipp needed him to be.

McGrath’s stats are more interesting. He had 16 possessions alone in the first half last Saturday. McGrath still has an incredible ability to find pockets of space — he was the guy setting up Tipp’s two late goal chances.

He really showed that brilliance, too, last year when almost driving Loughmore-Castleiney to a county senior hurling title.

McGrath will only be 31 in December but if he and the Mahers were to return next year, they would be entering their 14th season, Callanan his 15th.

Between them they have made 238 championship appearances. Their endurance and their excellence have been extraordinary.

Can they keep going? Will they want to? Would their experience still be invaluable around the squad? Will young players ever really develop though, unless they are given more responsibility?

Whatever they decide, Callanan, McGrath, and the two Mahers owe Tipperary, and the game of hurling, absolutely nothing. They are four of the greatest players Tipp have ever produced. They were the emblem of this Tipp generation but they will always be regarded as four of hurling’s most cherished warriors.